I am pleased to announce that six  of my Pinhole Landscapes will be on view this summer at Bainbridge Island Museum of Art (bima.org) in a  show called Women in Photography;  I am one of ten women being exhibited.  When Greg Robinson, the curator asked me to be in the show, he wondered how being a woman had influenced my work.   It was an apropos question.  I have long wanted to photograph the landscape but not in the way it had historically been done.  I did not want to work in the same vein copying the greats, like William Henry Jackson, Timothy O’Sullivan and yes even Ansel Adams.  And it seemed that all the greats had been men.  Making the urban night photographs (Nighttime)  had inspired me to try the landscape in a kind of crooked way (see asterisk below).  I wanted color, mostly because I love the way the long exposures at night shifted the colors and recorded a certain kind of movement.  I knew I could not get that feeling  during the day with the a lens camera.  The pinhole camera allowed for both a long exposure and color.  I have owned a  4 x 5 pinhole camera for years with which I had mostly made still lifes (loupe-holes).  I began with an all night long exposure, and it was a perfect negative (a happy accident I later discovered).  I scanned that negative and printed it digitally. There was something about that image (Tomales), a seven hour exposure that made me realize that I could do the landscape both at night and during the day.  In a crooked way, with the pinhole, with film.   The long exposures, in the wind, rain, snow, darkness,  make the images soft;  the pinhole records light and time like no other type of camera. Mostly when I am making images with the that camera, I am pushing the exposure envelope hoping to get enough light on the film, hoping for the image that I see before me, but it is always turns out differently once it is developed. Sometimes I am constrained by the available light.  Sometimes I am in love with the light and the moment and simply hope for the best.  All in all, I am well into making the landscape my own way.  I am happy not to see the image immediately.  Not to be able to actually look through the camera.  I love the mystery and the uncertainty.  The crookedness of it.

I am beginning to understand that  photography is as much about time as it is about light and the pinhole  records both.  Each image seems to happen against the odds.  Usal Beach, below is an example. Taken on the Lost Coast in Northern California, on a dreary, gray evening. It felt creepy, with the  abandoned campground, dried-up river to the ocean, high crashing surf, strange noises one could hear but not see.  A whole town once existed on this site. The three mile drive on a treacherous dirt road keeps most people away.  Yet on the evening I made the image, it seems there had been many people on the beach that day, there were lots of footsteps in the sand. No one was there when this image was made.  The waves were  close with a steep drop off yet the surf looks deceptively calm in the exposure.  While making the image, I had little hope it would turn out.  When I saw the negative a month later, I knew I had something. 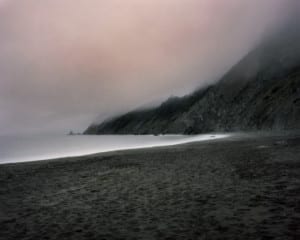 I don’t mean to take creepy landscapes but somehow end up in creepy places. Usal Beach was followed by several more images but the one below taken near the Dyke Access Road on the Columbia River speaks to the same aesthetic.  Cottonwood Tree, Columbia River was made with the camera perched on a plastic box near the water.  It started to rain about 15 minutes into the exposure. A big ship came up the river, in from Astoria. It moved slowly and I decided to make the exposure the length of time it took the ship to come past the camera, about an hour. The cottonwood tree was a victim of flooding and erosion from a very wet winter. I was surprised how it seemed to be growing out of the water. The wake from many boats on the river must have created that effect because the tree looked like it was growing out of the mud when the photograph was made. Again, none of the boats appear in the photograph, because the exposure is too long to record their speed. 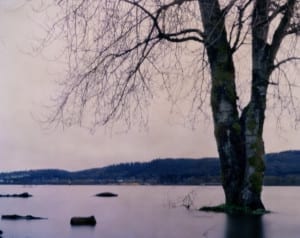 There are four other images in the show.  One made three years ago, the others within the last year.  I hope you can stop by BIMA.  The show will be up the entire summer.  The work of the ten women included in the show is diverse and interesting.  If you are in the Northwest, the opening is on Saturday, June 24th, from 2-5 pm for friends of friends of friends, all are welcome.

*My dear friend and mentor Judy Seigel coined the phrase crooked photography in the 1980s.  I am not sure if she invented the phrase but for her, it included all the photography that was not considered mainstream.  I am grateful for her support.  A blog post is in the works about all the years I knew her.  She passed about a month ago at the age of 86.  RIP Judy!