More on the Shunpike Storefront in South Lake Union 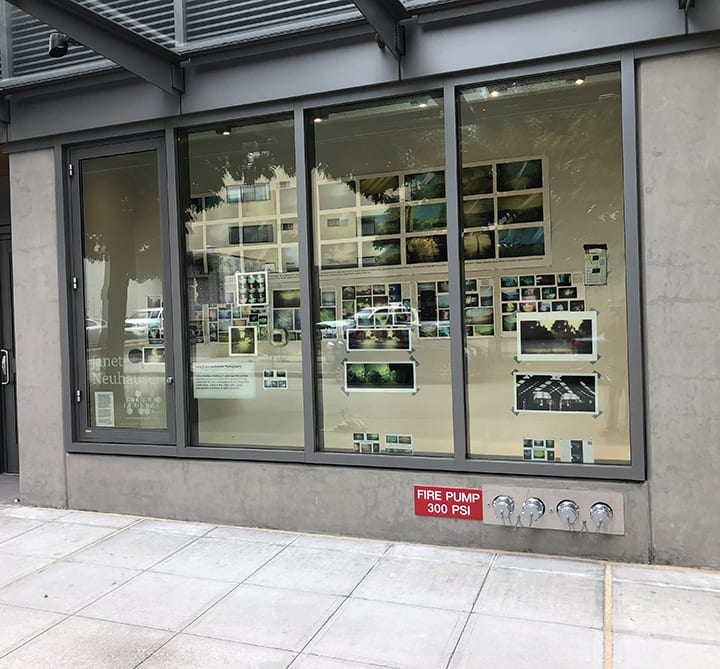 The storefont lives on.  Originally I placed five cameras in the Storefront window looking out to the so called view.  Not a great view but the cameras did make photographs.  I had two two-hole cameras, an altoid tin, my favorite square camera, an array of nine small cameras.  All of them were looking at the same thing:  a small plaza in front of the building, trees and the rain guard above the window.  They were up for about six weeks so the other day I took them down.  I reloaded the cameras and set them back with the exception of the altoid tin camera, I replaced that one with a larger, round camera.  I actually needed the altoid tin to go to another photographer who wanted a camera.  Right now I have no altoid tins in stock.  If anyone has some that would be great.  Send on over  to me or drop by and leave outside my door.  I could go and buy a 15 pack of altoids at Costco, but I really do not altoids anymore and would rather not do that.  Haven’t had to buy tins for about five years.  I know people have tins laying around their homes, so cough them up folks. (No pun intended).

Enough about altoid tins.  Here are the photographs taken from the window of the store front.  The featured photograph is a night time exposure by Shunpike of the window.  It looks better at night in a photograph because there are no reflections.  As you can imagine it was very difficult to chose the hundred or so images that are shown here.  There are no bad pinholes!  A different day I would have chosen different images.  But in the meantime, the cameras which were attached to glass window took the following photographs.  I do not know why they are the colors what they are.  All were done with the same paper, in the same location.  One would expect that they would be the same, but in the Array of Nine, they are not.  I put the cameras back up today and will leave them up until I take the whole thing down in September.  One more thing:  the security guard for the building I am in (Amazon donates their spaces) was upset that I could only take photographs to the South since that is way that the window faces.  I gave him a new telephoto camera to take a photograph of the Space Needle which is very close and to the west.  He went up to the eleventh floor of building and hung the camera on a window facing the needle.  This photograph of the Space Needle will be his and I will post under his name, since he hung it and is tending it.  Name will be revealed when the camera is taken down in September.

The Array of Nine;  small round cameras.  I do not know why some of the images are brown.

A two hole camera from an old Christmas Cookie tin 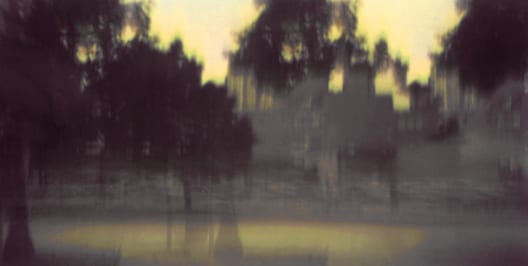 A two hole Saltine Cracker Tin camera.  The camera fell down once and was put back up and then slid down a ways another time. 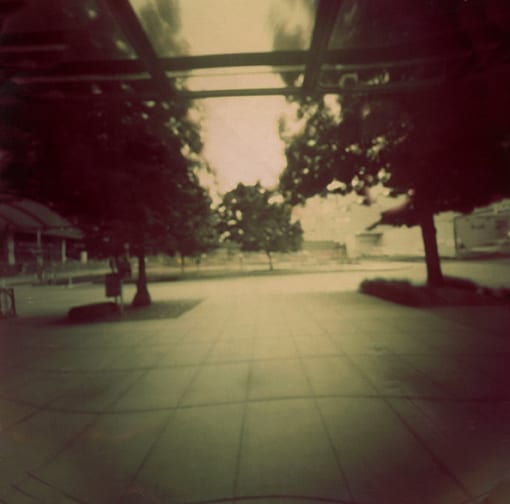 One of my favorite cameras;  a large square tin that has been used about 20 times.

If you have a chance, go by and see the storefront in the South Lake Union neighborhood.  There are, I think  ten windows by ten artists up on display.  Mine is on the corner of John and Boren.  Thank you Shunpike for supporting the Pinhole Project.  And lastly, the featured image is a photograph that I took today after rehanging the cameras.  Like I said too many reflections during the day.  Best if you go and see it yourself.  Thanks for reading.